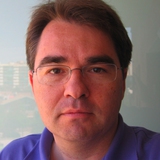 His main field of research are centered on theoretical and observational cosmology. In particular, he is interested in studying the temperature and polarization anisotropies of the cosmic microwave background radiation, the origin and development of the large-scale structures such as galaxies and clusters, and the nature of dark-energy that determines the fate of the universe.

Pablo is the PI of the MICE simulation project, a supercomputer simulation aimed at reproducing with unprecedented detail, the history of the universe, from much before the first stars formed up to nowadays, and determine how well future astronomical surveys, such as the DES, PAU, EUCLID, VHS, and PLANCK, where the group at the ICE is involved.