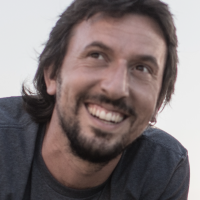 Ramón y Cajal fellow at the Institute of Space Sciences (ICE-CSIC) and member of the Institut d’Estudis Espacials de Catalunya (IEEC) since September 2021.

PhD in Physics from Universitat Autònoma de Barcelona (UAB) in 2011 under the supervision of Dr. Ramon Miquel at the Institut de Física d’Altes Energies (IFAE). Postdoctoral researcher at the Centro de Astrofísica (CENTRA) in Lisbon from 2011 to 2013, Fondecyt fellow working with Prof. Mario Hamuy at the Departamento de Astronomía of Universidad de Chile from 2013 to 2016, Research Associate at the Department of Physics and Astronomy of University of Pittsburgh from 2013 to 2019, and Marie Skłodowska-Curie fellow at the Department of Theoretical and Cosmological Physics of Universidad de Granada from 2019 to 2021.

The topics of my research are concerned with supernova physics and observational cosmology. I am involved in a number of leading large wide-field surveys such as the Dark Energy Survey (DES), the Dark Energy Science Collaboration (DESC) of the Legacy Survey of Space and Time (LSST), and the Nancy Grace Roman Space Telescope science collaboration, all of them trying to understand what is causing the current acceleration of the expansion of the Universe through observations of supernovae. In particular, I am interested in characterizing the local environment of supernova explosions, and how their locations can provide clues on both the properties of the progenitor stars and the physics of the explosion. These will help improving the standardization of supernova peak brightness and thus reducing systematic uncertainties in the measurement of extragalactic distances. More recently, I am focused on improving the determination of the current local expansion rate of the Universe, the Hubble constant (H0), using near-infrared observations of nearby type Ia supernovae.