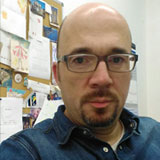 I am currently a staff reseacher at the Gamma-ray astrophysics group at IFAE. I did my PhD at the high-energy physics group at the Complutense University in Madrid, in the field of ground-based gamma-ray astronomy. In 2001 I joined the MAGIC collaboration as a postdoc in the group at the Univesity of Padua, from where I took part in the construction, commissioning and early Science exploitation of the MAGIC gamma-ray Cherenkov telescopes on the island of La Palma. After four years in Padua and a four-month stay at the Max-Planck Institute for Physics in Munich, I moved to IFAE in early 2006 as a Ramón y Cajal fellow. Since 2008 I am also a member of the CTA consortium, which was formed to build the next-generation ground-based gamma-ray observatory.

I am interested in the study of extragalactic sources of very-high energy gamma rays, mostly Active Galactic Nuclei (AGN), both in themselves (as the most powerful known particle accelerators in the universe) and as beacons which allow to study gamma-ray propagation over cosmological distances. On a more technical aspect, I am involved in the development of data analysis techniques for gamma-ray astronomy, and in the optimization of the design of the future gamma-ray observatory CTA via Monte Carlo simulations.